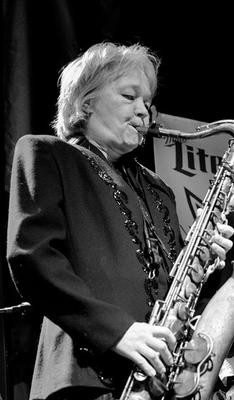 Sue Z
(sax/horn arranger)
Sue Leigh has played in numerous bands including "Small Paul & Beatstreet" (voted best R&B band in Arizona), "The Stealth Band"  (featuring her own compositions) and national acts "The Temptations" and "Guy Lombardo". She has won many music awards and was nominated for Best Sax in the Minnesota Music Awards. Sue arranges for "Latin Sound", "Jim Tolck" and other local bands. In her "spare time", she owns and runs Cat's Eye Music, an instrument repair and lesson studio.

Angie has been playing saxphones and flute professionally for 13 years. She plays all four main saxophones but specializes in Alto and Bari sax. She’s studied under well-known Twin Cities greats such as Kathy Jensen of Hornheads fame, and Pete Whitman. During her college years she worked as a showband musician for Carnival Cruise lines playing Bari Sax.  Angie can be heard on several recordings such as the Brandon Projekt’s debut album “Supa Tyte”, and the Adam Meckler Orchestra’s album “When the Clouds Look Like This” Which was named one of Itunes top 10 jazz albums of 2014, and The Roxxy Hall Band’s latest album “Rearview Mirror”.  You can currently hear Angie play with the Adam Meckler Orchestra and the Roxxy Hall Band. The rest of her time is spent with her 1 ½ year old daughter Noelle and her husband, fellow saxophone player David Hirsch. 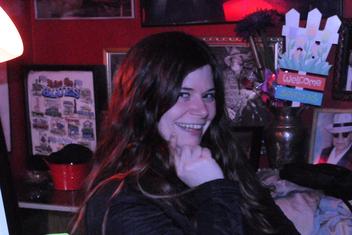 Roxxy Hall
(bass guitar/ vocals/songwriter)
Roxxy founded the band in 1992. She wrote her first song in 4th grade, had a band in high school and has been writing and playing ever since. In the 80's, Roxxy's band "The Babysitters" toured the greater Mid-West. She produced and hosted "Musical Chairs", a news and magazine show that featured outstanding women in music from 1994 through 1999. On two occasions, Roxxy won the Hometown Video Festival award for her work on Musical Chairs. She has been nominated by the Minnesota Music Academy for songwriting, best new band, and video production. She's produced and recorded the band's CD's at her own Peachy Studios, as well as recording projects for other local artists. She plays bass, writes originals and coordinates all facets of the show. Roxxy leads the band with flair and grace. She's all about getting people together to make music and she believes that music should always be fun.

Jan Boyer
(guitar/vocals/songwriter)
Jan Boyer has been performing with the Roxxy Hall Band since 1997. At the age of 21 she started playing guitar professionally. She traveled the Midwest with bands such as "Smilin' Ed" and "Lucky Star". She also was a member of the all Woman group "Surrender Dorothy". Jan's songwriting, melodic guitar playing and velvet smooth vocals add a dynamic dimension to this band. Jan's debut CD, "Long Way Home", was released in July of 2006.

Jennifer Evans-Hall
(keyboard/vocals/songwriter)
Jennifer Evans-Hall plays keyboard, trombone, harmonica and sings with the Roxxy Hall Band. She has a Bachelors degree in music from the University of WI-Superior. She has performed at numerous events in the Duluth-Superior area. She started writing music at an early age. One of her songs is on "Deck The Halls", the Roxxy Hall Band Christmas album. She is very pleased to be part of a band with such exceptional musicianship and great spirit.

​
Lee O
(drums/vocals)
Lee O. started playing with the Roxxy Hall Band in 1993. She began her drumming career in the 1980's performing with the bands "Chambray", "Leather and Lace", and the "Glo Girlz". You can't help but fall into the grooves she lays down. Lee O.'s harmonies and playful style are a definite crowd pleaser. 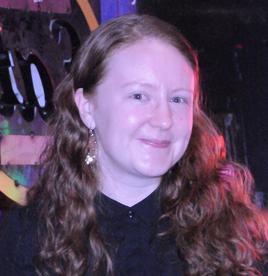